SHOWROOM UPDATE: For the safety of our staff and customers, our showroom will open by appointment only.
« Back to All Press 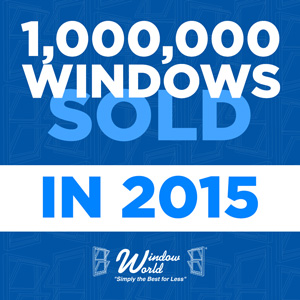 NORTH WILKESBORO, N.C., October 27, 2015 — Window World®, America’s largest replacement window and exterior remodeling company, proudly announced the sale of its 1,000,000th window for 2015 in early October. Although this is the seventh consecutive year Window World reached this sales milestone, the company has never attained the mark so early in a calendar year.

“Surpassing this annual goal sooner in the year is a true result of our commitment to homeowners across the country,” said Tammy Whitworth, chairman and CEO of Window World. “I am very proud of the entire Window World Family for hitting this milestone, and look forward to accomplishing this objective even earlier in 2016.”

This landmark is the latest in a number of sales achievements and industry accolades that Window World secured in 2015. The organization was ranked No. 1 Replacement Contractor in Remodeling magazine’s Top 550 for the seventh year in a row and named No. 1 Window Company in Qualified Remodeler’s annual Top 500 for the ninth consecutive year, all due to the hard work and dedication of its more than 200 locations nationwide. In addition, thanks to the integrity of the products and services it offers, Window World proudly announced its windows earned the Good Housekeeping Seal for the eighth year running.

Window World®, headquartered in North Wilkesboro, N.C., is America’s largest replacement window and home remodeling company with more than 200 locally owned and operated offices nationwide. Founded in 1995, the company sells and installs windows, siding, doors and other exterior products. To date, Window World has sold over 10 million windows. Window World is an ENERGY STAR® partner and its window products have earned the Good Housekeeping Seal for eight consecutive years. Additionally, through its charitable foundation Window World Cares®, the Window World family provides funding for St. Jude Children’s Research Hospital®, where it was named New Corporate Partner of the Year in 2010. Since its inception in 2008, the foundation has raised over $5.3 million for St. Jude. Window World, Inc. also supports the Veterans Airlift Command, a non-profit organization that facilitates free air transportation to wounded veterans and their families.

« Back to All Press